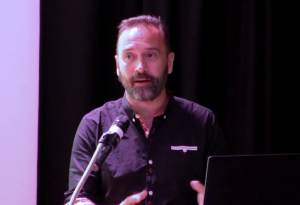 Steven, is a veteran video games artist and director, who’s been in the industry for a rather long time now (nearly 30 years) and a Doctor of the University of Essex.

Since his parents got him his first Sinclair (ZX80), then moving up to the heady heights of the Spectrum 128 via the ZX48. After a few failed Spectrum games ('Frogtanian' anyone?) and moving up the technical ladder to release some pretty bad shareware games in the early days of the Amiga, Steven got a job working at a company called Travelling Matte. There he was lucky enough to work on the last few seasons of a TV show called 'Knightmare' and (at the time) some of the most cutting edge 3D technology. From there he was privileged of joining the guys at Sensible Software working on “Sex ‘n’ Drugs ‘n’ Rock ‘n’ Roll” as well as 'Sensible Soccer'.

After “Sensi” shut its doors he went to Core Design and worked on a number of titles including 'Tomb Raider', 'Fighting Force' and 'Thunderhawk'. Next was another great and sadly to short lived company Genepool, for the game of the film 'X-Men 2: Wolverines Revenge'.

Then, after about 5 years of freelancing, Steven went to Exient and to live on a narrow boat in the middle of Oxford (with the Monday 4am starts and 3 hour commute that went with it!) to run their art department. Here he worked on titles such as 'FIFA', 'Need for Speed' and the BAFTA nominated 'The Sims 3', and then, onto Jagex as art director for 'Transformers Universe' the MMO.

Now he runs Shark and the Games Hub as well as spending time doing many STE(a)M activities whilst lecturing at NUA.

This website uses cookies to improve your experience while you navigate through the website. Out of these cookies, the cookies that are categorized as necessary are stored on your browser as they are essential for the working of basic functionalities of the website. We also use third-party cookies that help us analyze and understand how you use this website. These cookies will be stored in your browser only with your consent. You also have the option to opt-out of these cookies. But opting out of some of these cookies may have an effect on your browsing experience.
Necessary Always Enabled
Necessary cookies are absolutely essential for the website to function properly. This category only includes cookies that ensures basic functionalities and security features of the website. These cookies do not store any personal information.
Non-necessary
Any cookies that may not be particularly necessary for the website to function and is used specifically to collect user personal data via analytics, ads, other embedded contents are termed as non-necessary cookies. It is mandatory to procure user consent prior to running these cookies on your website.
SAVE & ACCEPT